Shell Hill is situated on the banks of the Marne River, approximately 6 kms from Black Hill and is said to be 5 million years old.  The hill gets its name from the deposit of oyster shells, which in some places were six metres thick.  The oyster shell deposit remained untouched until the 1930s when an old named Clarke found a use for it.

A crushing plant was set up in the gully below turning oyster shells into a fine powder (carbonate of lime) which, although not much good as a fertiliser helped to sweeten land in the heavy rainfall areas.

After a few years work ceased but the plant re-opened in 1942 turning the shell by hand into shell grit.  The crushing plant finally closed in 1946. 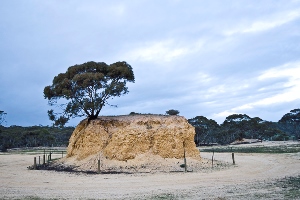