Find out where Henry Bryan disappeared at Morgan

Everyone loves a mystery and in 1839 the disappearance of Henry Bryan was never solved. 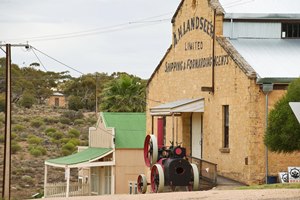 In 1839, Governor Gawler instructed Captain Sturt to conduct an expedition down the Murray River to investigate adjacent lands and overland from North West Bend near Morgan.

Henry Bryan, youngest son of the Reverend Guy Bryan of Woodham-Walter, Essex, England and a house guest of the Governor was invited to join the expedition.

His party took off on an expedition by horseback to Mt Bryan on Friday 13th December.  At the eastern base of Mt Bryan, with all water gone and the temperatures rising, Sturt recommended that Gawler and Bryan set off on the strongest horses to seek help for the rest of the party.

Bryan’s horse eventually made its way back to Adelaide with its hoofs grown to enormous length.

Bryan was never seen again to this day and has not been declared missing, presumed dead or a death certificate issued.

Visit the Morgan Museum and grab a trail brochure to visit the last known days of Henry Bryan and learn about this mysterious and renowned expedition.